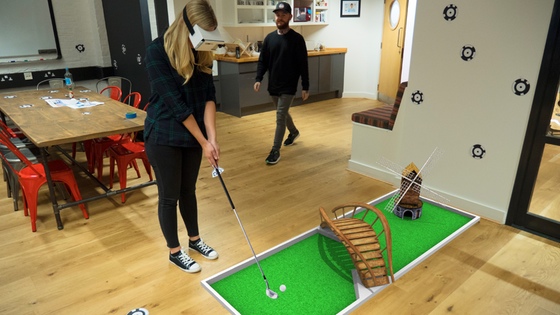 Interactive virtual content in the physical world: play mini-golf, visit Mars, or build an engine in 3D. Then create and share your own content. ZapBox 1.0 is no longer available for purchase, but ZapBox 2.0 is available now. Find out more and order directly from www.zappar.com/zapbox.

Latest Updates from Our Project:

Well there goes another one.

We're super happy to announce that all controllers will now come with triggers that you can use as an additional analog input in all experiences! Trigonomical!

We're absolutely blown away by all of the excitement and support we're receiving from everyone and couldn't be happier that this goal has been unlocked. The version you can see in the gif above is very much a prototype but the finished controllers will include something very similar.

The next goal is at $60k and if unlocked will mean a far easier method for viewing 3D models in MR which is something everyone can enjoy.

Beyond this, we have have something tremendously exciting that we're looking into for a new stretch goal. You'll have to wait until Monday for the announcement however as we're presently too giddy with excitement to think straight. (Well, that and the fact we need a bit more time to figure out exactly what we’ll be promising!)

Right, time to play with ZapBox some more... wouldn't it be great if you could join us? ;)

Have a wonderful weekend, ZapBoxers.

You've only gone and done it again

With this goal unlocked every single ZapBox user will be able to upload 3D models to be viewed in MR via a simple web interface. This will allow everyone to view 3D models of their choice through ZapBox - even if they have zero scripting experience.

There's slightly less than a week remaining of the campaign and all but our final super-secret-best-till-last stretch goal have been successfully unlocked. We're so close to that next goal we can almost taste it - just have a look at ALL THAT GREEN.

We're honestly completely blown away by how much love you've all shown ZapBox so far, and we're positive we can hit that last stretch goal and make the entire offering better for everyone. If you want to know more about why the $70k stretch goal is so great you can read about it in our previous update.

There's a couple of things that we want to draw your attention to in this update.

The first is that the Developer Bundle extras can be added to any of the multipack pledge levels by simply tacking-on an extra $10 to your total pledge amount. This has been at the top of our FAQ section since we first realised that our pledges didn't quite offer the à la carte selection that many of you would like, and we wanted to spread the good news that you can in fact have it all.

We also want to provide a few more details about how multiple users will be able to share the same physical space if we hit that $70k stretch goal.

Multiple users will be able to share the same world pointcodes without any issues. We’ll also share the map over the network so only one of the users will need to go through the map-building process.

The best solution is to use different pointcodes on the controllers for different users so the app can always tell the difference. We can’t print completely unique codes for every user but we have been chatting to our manufacturing partners about this and have committed to making four distinct ZapBox kits which will all have different pointcodes (both for world markers and controllers).

So what does all this mean?

Let's call these kits A, B, C, and D. You can think of them a bit like the channels of radio-controlled cars - there’s a few channels available and as long as you use different channels you can race against each other without interference.

Pledges of more than four kits such as The Educator will get some repeats, but we’ll build them out of multipacks so you’ll be guaranteed to have sets of four that can operate without issues in the same space.

In short, if you want to guarantee a great experience with multiple ZapBoxes in the same physical space, you should pledge at a multipack level! And remember if you also want the developer bundle benefits, just add $10 to the pledge.

Oh, and one other advantage of the multipacks: the set of world pointcodes will also be different in each kit, so you’ll be able to build maps of larger spaces.

That's all for now. As ever, thanks for the incredible support and for believing in ZapBox along with us. Onwards to $70k and to unlocking the final stretch goal :-)

Have a great weekend, ZapBoxers!

Thanks to all of you we’re now more than two thirds of the way towards our funding goal! Huzzah!

At the risk of sounding like a broken record (an incredibly affirming and positive record, that is) we’d like to thank all of you again for the support and excitement that we’ve received over the past five days. You’re all wonderful and we just thought you should know.

So, what next? Firstly here’s a few things that we know:

We’re pleased to announce that we’ll be hosting a Kickstarter Live Stream on Wednesday 23rd November at 5:30pm GMT / 12:30pm EST / 9:30am PST. We’ve noticed backers are predominantly based in the US or UK so tried to find a time that worked for the majority of you, but apologies if you’re in a part of the world that makes that time awkward. We still love you too!

The format will be an Ask Me Anything and we encourage all of you who have any questions at all to join in and put us on the spot. All comments and questions are welcome - we relish the opportunity to answer any questions you have, try and convince any skeptics out there, and to hear your feedback on what we’ve done so far and how we could improve the campaign.

If any of you aren’t able to join for the stream but do have questions then please put your questions in the comments section and we’ll look to address them on Wednesday. You’ll then be able to watch the recorded stream on Kickstarter for two days after it finishes, and we’ll probably post it up somewhere after that in case you miss it! Even if you are planning to join us live, please feel free to post questions early so we can get a head-start on preparing the best possible responses :-)

That’s all for now. Keep doing what you’re doing because it’s obviously working a treat.

You guys are currently unlocking stretch goals faster than the speed at which we can create the graphics. Now that's pretty awesome.

Here's what you're getting:

Thanks to you ZapBrush will now be getting some extra TLC during its development and will come with fully integrated text support :-)

Next up is controller triggers and these will be a game changer. It's something that we've been prototyping with the help of our manufacturing partner Mr Cardboard and it's all very exciting. If we hit $50k then we'll all be able to make use of those marvellous opposable thumbs we have... in MR!

We better get started on that next graphic, then ;)

Having recovered from an excellent weekend where we hit our funding goal we're now back in the office and eagerly discussing the future of ZapBox.

And so, allow us to introduce to you the stretch goals we have planned for ZapBox. These comprise little ideas or improvements that we've thought up while in the process of designing ZapBox and realising it as a product. Some extra bells and whistles.

With your help (and the help of those yet to join!) we can make ZapBox the best that it can be!

Let's dig a little deeper into what these goals mean.

ZapBrush is one of our favourite pieces of content, and if this goal gets unlocked we’re going to make it more awesome. We’ll integrate an in-experience keyboard interface so you can seamlessly add 2D and 3D text to your creations. Wordtacular!

We’ll improve interaction with experiences by adding a ‘trigger’ or ‘slider’ mechanism to the controllers, providing an analogue input in addition to position and orientation tracking. More ways of interacting with ZapBox content!

A simple way for everyone to visualize and share their 3D models in MR without having to use or learn the full ZapWorks Studio tool. Just drag and drop your models into a web interface and they’ll be instantly available for viewing in ZapBox, complete with animation support. Prepare to meet your models!

We're super excited to see how far we get with these. As always, please do keep asking great questions, making great suggestions and generally spreading the greatness of ZapBox :-)